Summary
What does it do?
Ingredients
Preparation
How to use it?
Precaution
In the media
Reviews
Summary
Ban Xia Bai Zhu Tian Ma Pian (Ban Xia Bai Zhu Tian Ma Wan, BalanceEZ™, formerly Vertigoff™, 半夏白术天麻片) is an ancient Chinese medicine that dispels Wind, Phlegm, and Dampness. This formula supports harmony in body's balance.†
Best before date:

Helps Support Balance After A Sense of Spinning†

Pressure builds up in your ear. Even though you’re firmly rooted on the ground, to your ears, it feels like you’re scuba diving on the ocean floor.

As if that’s not enough, you begin to hear an agonizing ringing or buzzing sound. Nobody else notices the sound except for you. It’s a disturbing, alienating feeling. Mercifully, the mysterious horrible sounds fade away. Your sense of balance makes you feel like you’ve been drinking alcohol heavily.

If you’re seeking an herbal remedy, BalanceEZ is used for the traditional Chinese medicine (TCM) syndrome that includes lightheadedness.

Containing 14 botanicals, BalanceEZ is based on a formula that’s been used successfully since the 13th century in China. 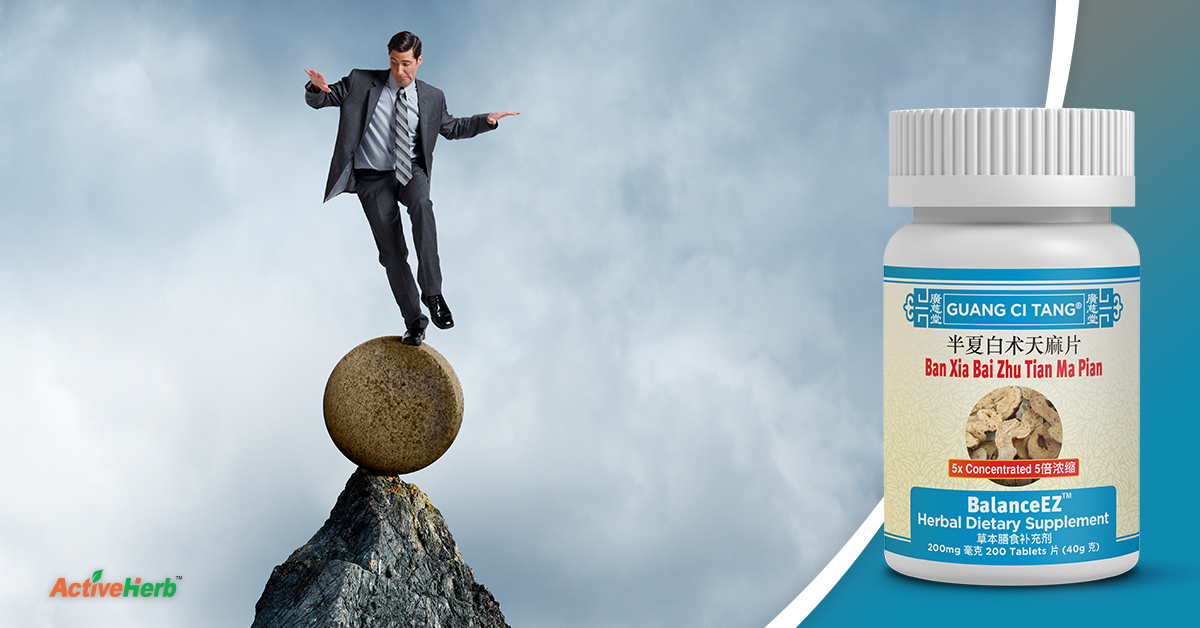 The TCM syndrome BalanceEZ takes care of is called Wind-Phlegm invading upward (风痰上扰证), presenting with a sensation of loss of balance, an urge to throw up, along with a whitish and greasy tongue coating and a slippery pulse.

In TCM theory, spinning is indicative of Wind. Wind is generated from the Liver. As a physical wind can shake a tree, Wind in the body can cause spinning and imbalance.

Similarly, an urge to throw up is indicative of phlegm and dampness. When dampness accumulates, it produces phlegm, which prevents "clear Yang" (the essences: Qi, Blood, Yin, Yang, etc.) or nutrients from ascending and nourishing the head. As a result, a disturbance in balance may occur.

BalanceEZ is uniquely formulated to both extinguish Internal Wind and clear Phlegm. It remains one of the most widely dispensed Chinese herbal medicines for these symptoms to this date.

Zhi Ban Xia (aka ‘Ban Xia’) is the primary namesake herb that dissolves phlegm. As such, it harmonizes the stomach, which may resolve stomach discomforts.

Bai Zhu (Atractylodes Rhizome), also a namesake herb, and Fu Ling act together to strengthen the Spleen and dry dampness. This is to address the root cause of phlegm generation in the Spleen.

Finally, the last herb in the formula, Gan Cao (Licorice Root) both tonifies the Spleen and harmonizes the action of other herbs in the formula.

Ingredients
Other ingredients: corn starch (non-GMO), dextrin, magnesium stearate.
We use as little fillers/binders as possible which together amounts to 13% of the tablet weight.
Preparation

At a true 5:1 concentration, this product represents the most potent form of Ban Xia Bai Zhu Tian Ma Pian (Wan) on the market. One tablet is equal to 1 gram of raw herb.

Please note that Guang Ci Tang® Ban Xia Bai Zhu Tian Ma Wan in the pill form, which has the same formulation as the tablet, is discontinued.

Ban Xia Bai Zhu Tian Ma Pian tablets are made with 100% natural herbs that are tested for authenticity, quality, and potency. A traditional water decoction is prepared with the herbs to reproduce the time-tested efficacy of the formula, and this water decoction is concentrated with our proprietary technology to form a potent extract that is made into easily absorbed tablets, which are remarkably effective, easy to use, and safe. The tablets are produced by Guang Ci Tang® in our state of the art cGMP-certified facility and imported in accordance with U.S. FDA guidelines. When you choose Guang Ci Tang® products, you are taking advantage of a wonderful fusion of science and tradition that incorporates the highest standards in the field of Chinese medicine today.

The standard dosage for BalanceEZ™ is 7 tablets each time, taken 2 to 3 times daily with or before meals. One bottle lasts users 10 to 14 days. The dose may be doubled for a quicker and stronger response as needed. Consult your practitioner for precise dosage recommendations based on body weight and other factors.

BalanceEZ™ has a mild action and therefore it usually takes time before its effects become apparent.

Consult your herbalist or physician before use if you are taking other medicines.
If any adverse reaction occurs, discontinue use.
Keep out of reach of children.
In the media