Summary
What does it do?
Ingredients
Preparation
How to use it?
Precaution
In the media
Reviews
Summary
Liu Wei Di Huang Pian (Liu Wei Di Huang Wan, Liu Wei Di Huang Tang, YinVive™, 六味地黄片) is among the most regarded ancient Chinese herbal formulas. It is used to nourish Yin of the Yin-Yang, support the lower back, and support sexual wellness.
Best before date:

In Traditional Chinese Medicine (TCM), Liu Wei Di Huang Wan (YinVive™) can replenish Yin due to the Yin insufficiency of the kidney. The kidney is the innate foundation of all organs with respect to the Yin-Yang principles, Qi essence etc. When the kidney is diminished functionally, many other organs show malfunctions. It is thus vitally important to maintain the kidney in a good state. This explains why many symptoms seemingly unrelated to the kidney may be relieved by restoring the kidney Yin-Yang.

In TCM, a diminished Yin manifests as weakness in the lower back, a hot feeling of the body, and pale complexion etc. Liu Wei Di Huang Wan is indicated in China Pharmacopoeia for the Yin insufficiency of the kidney with a presention of weakness and soreness of the loins and the limbs, emission and sweating, lightheadedness, and occasional ringing in the ears associated with aging. 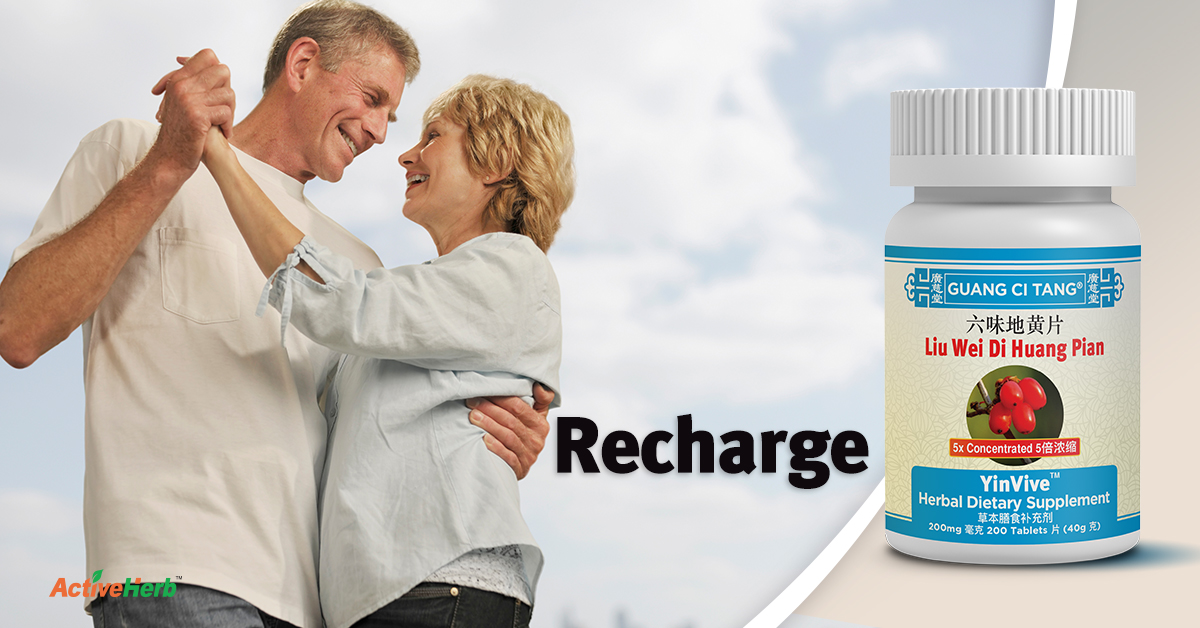 Liu Wei Di Huang Wan is originated from Jin Kui Shen Qi Wan (YanVive™) which contains additional Chinese herbs that replenish Yang. These YinVive and YanVive pair are the widely used Chinese medicine to tonify either Yin or Yang energy of the body. In many cases, they can be applied to the same symptoms. Whether using YinVive or YanVive depends on whether the signs of Yin or Yang deficiency is present. Highlighted below are some instances in which YinVive may be used.

• Lower back weakness due to the Kidney Ying deficiency, which may manifest as weakness and soreness of the waist and legs, easily sweating and a sensation of feeling heat in the body such as hot flashes, a pale complexion and tiredness, lightheadedness, declined vision, or occasional ringing in the ears associated with aging. These are often complaints for people, especially professionals who spend hours in front of a computer each day and who are getting older (e.g., over 40).

• Sexual wellness. In the case of Kidney Ying deficiency, one may experience poor male performance. The back feels weak the next day and it takes longer to achieve a follow-up erection.

Ingredients
Other ingredients: corn starch (non-GMO), dextrin, magnesium stearate.
We use as little fillers/binders as possible which together amounts to 7% of the tablet weight.
Preparation

At a true 5:1 concentration, both products represent the most potent form of Liu Wei Di Huang Pian (Tang/Wan) on the market. One tablet or pill is equal to 1 gram of raw herb. Both Both tablets and pills have the same formulation.

Liu Wei Di Huang Pian tablets are made with 100% natural herbs that are tested for authenticity, quality, and potency. A traditional water decoction is prepared with the herbs to reproduce the time-tested efficacy of the formula, and this water decoction is concentrated with our proprietary technology to form a potent extract that is made into easily absorbed tablets, which are remarkably effective, easy to use, and safe. The tablets are produced by Guang Ci Tang® in our state of the art cGMP-certified facility and imported in accordance with U.S. FDA guidelines. When you choose Guang Ci Tang® products, you are taking advantage of a wonderful fusion of science and tradition that incorporates the highest standards in the field of Chinese medicine today.

The standard dosage for Liu Wei Di Huang Pian (Wan) is 5 tablets or pills each time, taken 2 to 3 times daily with or before meals. One bottle lasts users 2 to 3 weeks.

Liu Wei Di Huang Pian (Wan) is a mild tonic and therefore it takes time before its effects become apparent.

Liu Wei Di Huang Wan has been safely used by with few adverse effects or contraindications. Suitable for a long term administration.