Summary
What does it do?
Ingredients
Preparation
How to use it?
Precaution
In the media
Reviews
Summary
Huan Shao Zhuang Yang Pian (Youngain™, 还少壮阳片) is a Chinese herbal supplement specially formulated to tonify Yang energy and support male vitality.†
Best before date:

Millions of men have little sex drive. "Low-T," marketing-speak for "low testosterone," is often blamed for a precipitous decrease in male virility and strength. It's no wonder that 'low-T' treatments are very popular. Anti-aging male wellness clinics have sprouted all over the country, promising to cure their patients' lack of sex drive and energy.

If you want to feel young again, at least in the bedroom, Youngain™ is a safe, all-natural herbal dietary supplement. It does not work within hours. Given patience, Youngain™ may help revive your sexual vitality by building the whole body from within. 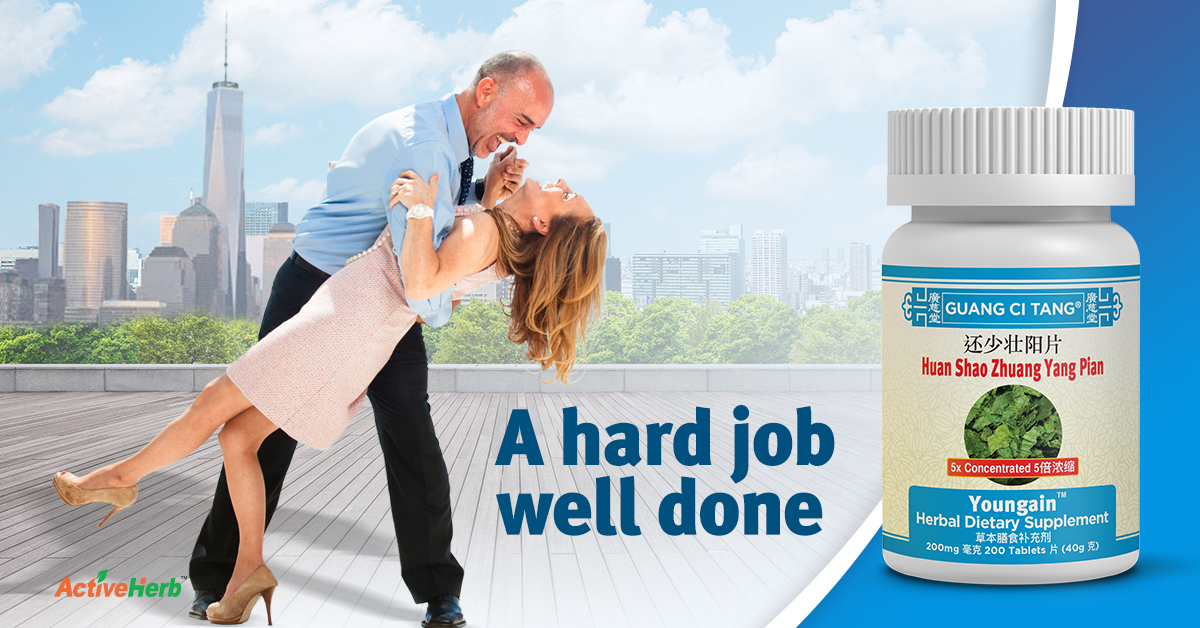 Youngain™ is one of our signature formulas that's based on Traditional Chinese Medicine (TCM). There are nine all-natural herbs in Youngain™, six of which support sexual wellness by nourishing Kidney Yang. Low sex drive or the inability to develop or maintain an erection is attributed, according to TCM theory, to weakened Kidney Yang.

Three other herbs in Youngain™ are Yin-enhancing herbs. Why the need for Yin herbs, when Yang, particularly Kidney Yang boosts sex drive? Think of Yang energy as the firing gun and Yin as the ammunition. You can't fire a gun effectively if it's not loaded. The Yin herbs help "reload the ammunition.".

Youngain™ is safer and more sustainable than most TCM-based male-performance products. This is because they support only Yang energy, which, over time, if Yin energy is not balanced as well, can be potentially dangerous. Youngain™ is itself a potent Yang tonic but also effectively supports Yin energy.

Six of the nine all-natural herbs in Youngain are powerful Kidney tonics. These include Ba Ji Tian (Morinda root), Yin Yang Huo (Horny goat weed), Suo Yang (Cynomorium), Bu Gu Zhi (Psoralea fruit), Tu Si Zi (Dodder seed), Du Zhong (Eucommia bark). They are warm in nature and well known in Chinese medicine to tonify the Kidney and invigorate Yang energy. Many of them also strengthen the tendons and bones, and solidify the Jing essence. They are all of botanical origin and do not contain any animal parts. Together, these Chinese herbs represent perhaps one of the strongest combinations of yang-promoting (male performance) herbs.

The three Yin tonics in Youngain™ are Shu Di Huang (Prepared rehmannia), Shan Zhu Yu (Dogwood fruit), which is a tonic for both Kidney and the Liver; and Shan Yao (Chinese yam), which also nourishes the Spleen. Together they help balance and provide support for the Yang-boosting herbs.

Ingredients
Other ingredients: corn starch (non-GMO), dextrin, magnesium stearate.
We use as little fillers/binders as possible which together amounts to 7% of the tablet weight.
Preparation

At a true 5:1 concentration, this product represents the most potent form of Huan Shao Zhuang Yang Pian on the market. One tablet is equal to 1 gram of raw herb.

Huan Shao Zhuang Yang Pian tablets are made with 100% natural herbs that are tested for authenticity, quality, and potency. A traditional water decoction is prepared with the herbs to reproduce the time-tested efficacy of the formula, and this water decoction is concentrated with our proprietary technology to form a potent extract that is made into easily absorbed tablets, which are remarkably effective, easy to use, and safe. The tablets are produced by Guang Ci Tang® in our state of the art cGMP-certified facility and imported in accordance with U.S. FDA guidelines. When you choose Guang Ci Tang® products, you are taking advantage of a wonderful fusion of science and tradition that incorporates the highest standards in the field of Chinese medicine today.

The standard dosage for Youngain™ is 6 tablets each time, taken 2 to 3 times daily with or before meals. One bottle lasts users 11 to 17 days.

Youngain™ is a mild tonic and therefore it usually takes time before its effects become apparent.

Youngain™ has been safely used with few adverse effects.

As the formula makes you feel hot, it is not suitable for use if you have dry mouth, thirst, sweat, or dry stool.
Discontinue use if any adverse symptom occurs.
Consult your herbalist or physician before use if you are taking other medicines.
Recommended for man only.
Keep out of reach of children.
In the media