Summary
What does it do?
Ingredients
Preparation
How to use it?
Precaution
In the media
Reviews
Summary
Tian Ma Gou Teng Wan (Tian Ma Gou Teng Pian, Tian Ma Gou Teng Yin, Liver Windclear™, 天麻钩藤片) is a famous Chinese herbal medicine that calms the Liver and extinguishes Wind. This formula is used for the Liver Wind syndrome.†
Best before date:

Do you occasionally feel tension in the head? Of course you do, who doesn't? Maybe you also get lightheaded from time to time and have trouble sleeping? And maybe you're concerned about your blood pressure?

In fact, these concerns are, according to traditional Chinese medicine (TCM) theory, indicative of "internal wind," or wind generated inside the body. Just as a strong atmospheric wind can shake and bend a tree, internal winds can jostle body parts, potentially causing tremors.

In TCM, the Liver has the Five Elements trait of wood (like a tree). Internal wind originates in the Liver and is often referred to as "Internal Liver Wind."

When Liver Wind further develops, involuntary movement of fingers or toes and tremors may occur. In addition, other signs of Liver Wind may include occasional ringing in the ear, swollen eyes, red face and red tongue. 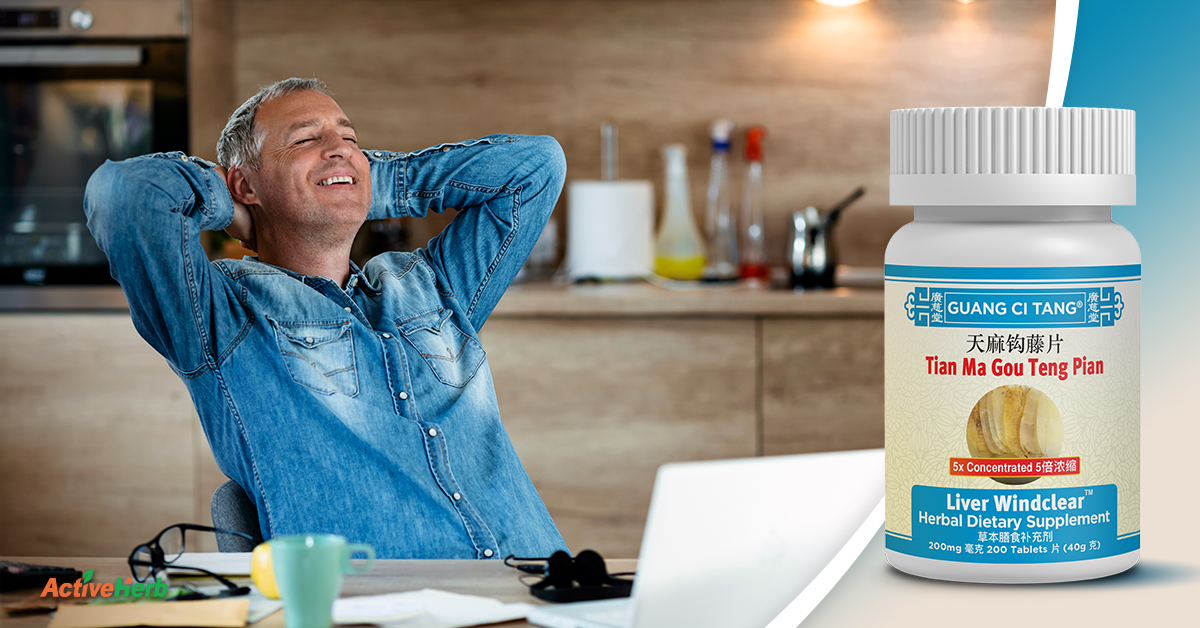 Liver Windclear™ (Tian Ma Gou Teng Pian) is a famous TCM formula, which may alleviate common symptoms associated with internal Liver Wind. Liver Windclear may also help with involuntary shaking and maintain a healthy blood pressure that is already within the normal range.†

Compared to classic Chinese medicines, the formula for Liver Windclear was developed a blink of an eye ago.

The Mandarin name for Liver Windclear refers to two herbs that are used in TCM to address involuntary muscle movements, all of which are indications of internal Wind caused by rising Liver Yang.

In TCM theory, there are several causes of internal Liver wind. A major root cause is Yin deficiency of the Liver and Kidneys. As Yin energy fails to balance Yang energy, Liver Yang spirals out of control to uprise, generating heat. And this heat further contributes to Liver Wind. Meanwhile, heat depletes your Liver of calming Yin energy. And depleted Yin of the Liver starves muscles of nutrients, ultimately leading to involuntary muscle movements such as spasms.

Liver Wind most often affects the upper part of the body. This explains why discomfort in the head and lightheadedness are two common symptoms.

How Does Liver Windclear Work?

Liver Windclear acts on all the root causes mentioned above, thereby extinguishing internal Wind by sedating Yang, calming the Liver, clearing heat, invigorating the Blood, and nourishing both the Liver and Kidneys.

Ingredients
Other ingredients: corn starch (non-GMO), dextrin, magnesium stearate.
We use as little fillers/binders as possible which together amounts to 9% of the tablet weight.
Preparation

At a true 5:1 concentration, both products represent the most potent form of Tian Ma Gou Teng Pian (Yin/Wan) on the market. One tablet or pill is equal to 1 gram of raw herb. Both tablets and pills have the same formulation.

Tian Ma Gou Teng Pian (Wan) tablets are made with 100% natural herbs that are tested for authenticity, quality, and potency. A traditional water decoction is prepared with the herbs to reproduce the time-tested efficacy of the formula, and this water decoction is concentrated with our proprietary technology to form a potent extract that is made into easily absorbed tablets, which are remarkably effective, easy to use, and safe. The tablets are produced by Guang Ci Tang® in our state of the art cGMP-certified facility and imported in accordance with U.S. FDA guidelines. When you choose Guang Ci Tang® products, you are taking advantage of a wonderful fusion of science and tradition that incorporates the highest standards in the field of Chinese medicine today.

The standard dosage for Liver Windclear™ is 6 tablets or pills each time, taken 2 to 3 times daily with or before meals. One bottle lasts users 11 to 17 days.

Liver Windclear™ has a mild action and therefore it usually takes time before its effects become apparent.

Tian Ma Gou Teng Pian (Wan) has been safely used with few adverse effects when it is used as directed.

Consult your herbalist or physician before use if you are taking other medicines.
Keep out of reach of children.
In the media