Summary
What does it do?
Ingredients
Preparation
How to use it?
Precaution
In the media
Reviews
Summary
Jian Dan Gu Chun Pian (CholestAssure™, formerly Jiang Dan Gu Chun Pian, 健胆固醇片) is a Guang Ci Tang's signature formula to support cholesterol levels that are already within the normal range.†
Best before date:

Today everyone recognizes how important it is to keep a healthy level of cholesterol. Though some cholesterol is needed to have efficient cell membrane structure, to produce steroidal hormones, and other critical functions.

Lifestyles matter. Diet and exercise are the first suggested approaches to help maintain normal cholesterol levels1, for example, by reducing intake of fat in the diet and eating a primarily plant-based diet. Natural herbal supplements such as CholestAssure™ may also play a role in keeping serum cholesterol and triglycerides at levels that are already within the normal range.

CholestAssure™ is not a classic traditional Chinese medicine (TCM). This botanically-sourced natural remedy for maintaining healthy cholesterol and triglycerides is our signature formula. The reason why ActiveHerb does not use a classic TCM formula is quite simple. In TCM, there is no focus on cholesterol. Cholesterol is not mentioned in classical TCM texts.

Beyond getting a blood test for cholesterol levels, many people do not realize that they even have excess serum cholesterol or triglycerides as it may not manifest any symptom. 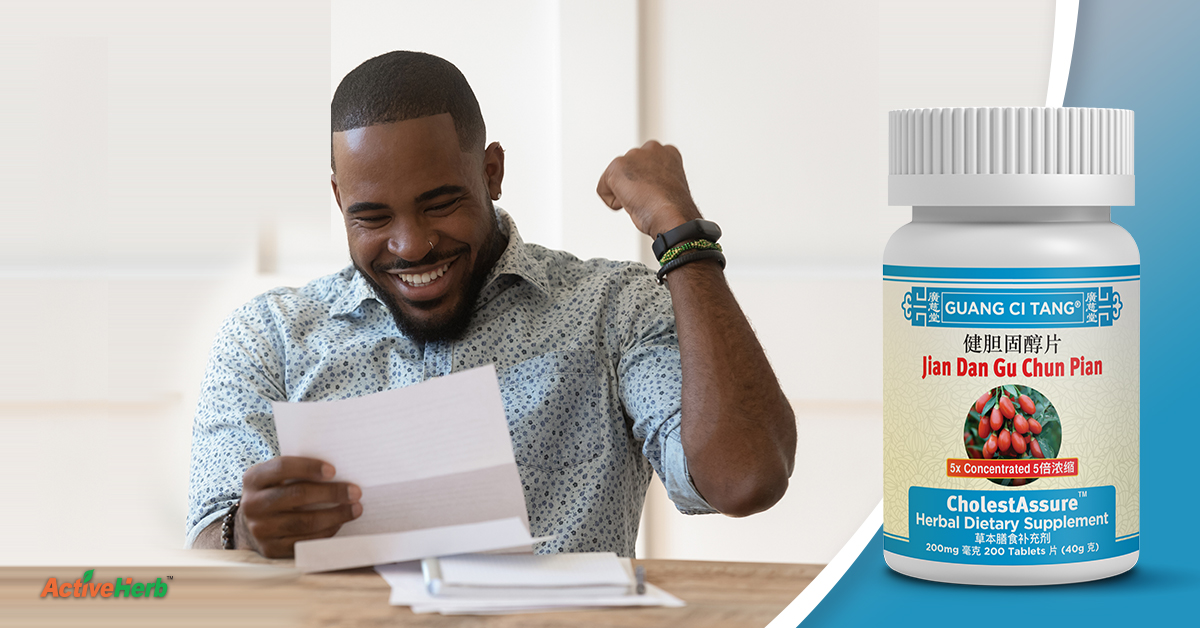 From a TCM perspective, cholesterol may belong to "internal phlegm," and its buildup in the blood vessels may add to "blood stasis." Thus, Chinese herbs that remove phlegm and blood stasis have help support a healthy cholesterol metabolism from the blood. Indeed, studies have found that many Chinese herbs may play such a role, including each of the herbs in CholestAssure™.

If you want to harness the power from nature to support your cholesterol, look no further than CholestAssure™.

Hawthorn fruit (Fructus Crataegi, Sheng Shan Zha) is used in TCM to improve digestion and remove food retention in the stomach, as well as promote blood circulation to disperse blood stasis. Because it unblocks stagnation, it is particularly beneficial for those who eat fatty, greasy foods.

Fleeceflower root (Radix Polygoni Multiflori, He Shou Wu) is a Liver and Kidney tonic and nourishes the Blood and Jing. This famous TCM herb also moistens the Intestines and unblocks the bowels.

The Chinese herbs used in CholestAssure were found in studies benficial in supporting a healthy, normal cholesterol metabolism.†

Ingredients
Other ingredients: corn starch (non-GMO), dextrin, magnesium stearate.
We use as little fillers/binders as possible which together amounts to 10% of the tablet weight.
Preparation

At a true 5:1 concentration, this product represents the most potent form of Jian Dan Gu Chun Pian (Wan) on the market. One tablet is equal to 1 gram of raw herb.

Please note that Guang Ci Tang® Jian Dan Gu Chun Wan in the pill form, which has the same formulation as the tablet, is discontinued.

Jian Dan Gu Chun Pian tablets are made with 100% natural herbs that are tested for authenticity, quality, and potency. A traditional water decoction is prepared with the herbs to reproduce the time-tested efficacy of the formula, and this water decoction is concentrated with our proprietary technology to form a potent extract that is made into easily absorbed tablets, which are remarkably effective, easy to use, and safe. The tablets are produced by Guang Ci Tang® in our state of the art cGMP-certified facility and imported in accordance with U.S. FDA guidelines. When you choose Guang Ci Tang® products, you are taking advantage of a wonderful fusion of science and tradition that incorporates the highest standards in the field of Chinese medicine today.

The standard dosage for CholestAssure™ is 6 tablets each time, taken 2 to 3 times daily with or before meals. One bottle lasts users 11 to 17 days. The dose may be doubled for a quicker and stronger response as needed. Consult your practitioner for precise dosage recommendations based on body weight and other factors.

CholestAssure™ is a tonic and therefore it usually takes time before its effects become apparent.

Consult your herbalist or physician before use if you are taking other medicines.
Keep out of reach of children.
In the media