Chai Hu Long Gu Lu Mu Li literally means "Bupleurum plus Dragon Bone & Oyster Shell" in Chinese. It falls under the category of formulas that calm the spirit. Chai Hu Jia Long Gu Lu Li Tang originally appeared in the great classic of Chinese Medicine, the Shang Han Lun, over 1800 years ago. It was formulated for the treatment of the "three Yang stages" condition in the TCM term.

Today, the applications of this formula have expanded to include many situations due to fear or phlegm disturbing the Liver/Gallbladder system. The hallmark signs of this pattern are sensation of fullness in the chest, loss of temper, occasional heart pounding and signs of spirit disturbance. According to Chinese Medicine, the spirit (Shen) resides in the Heart. When the Heart is disturbed (as by fear or heat) it cannot reside peacefully and may 'float upwards' leading to the above signs. Typically, this pattern presents with a rapid, wiry pulse and the tongue is red with a greasy coat. 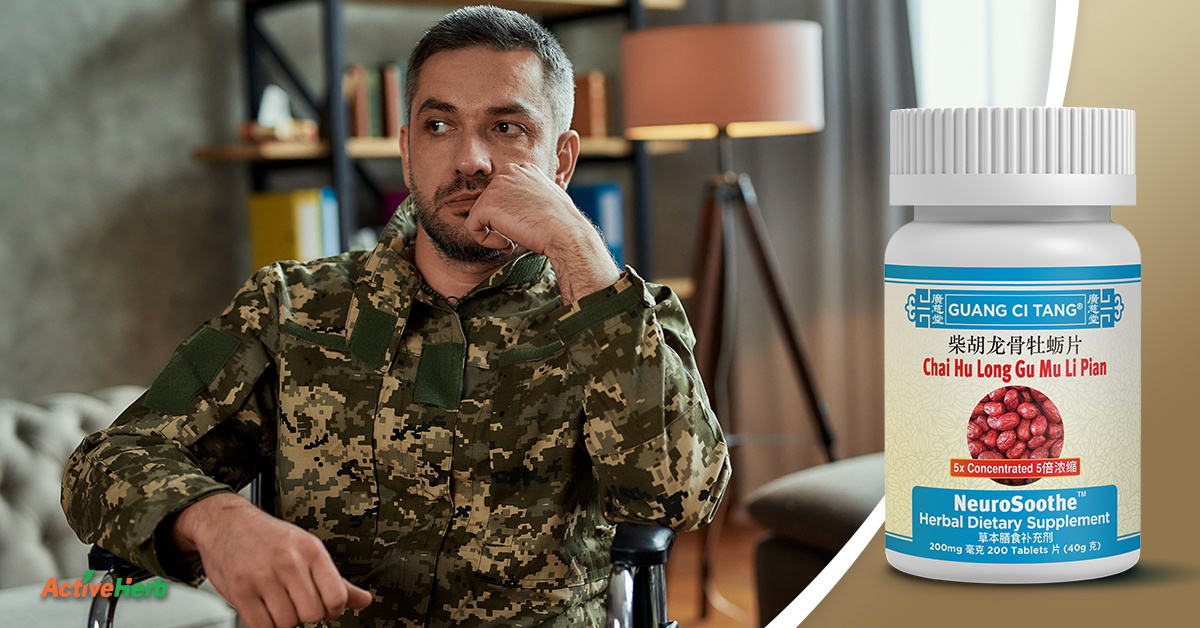 Chai Hu Long Gu Mu Li Pian is a variation of Xiao Chai Hu Tang which deals with the lesser-Yang stage (Shao Yang) of disease. Chai Hu Long Gu Mu Li Pian goes further to address all three Yang stages, including the greater-Yang (Tai Yang) and Yang-brightness (Yang Ming). The formula is composed of eleven Chinese herbs which address each of the three Yang stages and their respective meridians.

Gui Zhi (Cinnamon) is a chief herb in the formula used to resolve the Tai Yang, which is the most exterior of the three stages. Gui Zhi promotes the flow of Yang Qi (energy) which helps relieve the feeling of fullness in the chest and body. The chief herbs Chai Hu (Bupleurum) and Huang Qin (Scutellaria) work on the Shao Yang stage to cool and support the Gallbladder and Liver, promote the proper movement of Qi, release the exterior and resolve phlegm. The final chief herb in the formula, Da Huang (Rhubarb root) addresses signs of Yang Ming stage disorder by purging heat, clearing dampness, and supporting the bowel movement.

Finally, Sheng Jiang (Ginger) and Da Zao (Jujube) harmonize the formula and help to further direct the actions towards balancing the interior and exterior aspects of the body.

Chai Hu Long Gu Mu Li Pian is a complex formula containing an elegant combination of herbs that are both warm and cold, ascending and descending. Great care should be exercised in TCM pattern differentiation before application of this formula.

Ingredients
Other ingredients: corn starch (non-GMO), dextrin, magnesium stearate.
We use as little fillers/binders as possible which together amounts to 5% of the tablet weight.
Preparation

At a true 5:1 concentration, this product represents the most potent form of Chai Hu Long Gu Mu Li Pian (Tang/Wan) on the market. One tablet is equal to 1 gram of raw herb.

Please note that Guang Ci Tang® Chai Hu Long Gu Mu Li Wan in the pill form, which has the same formulation as the tablet, is discontinued.

Chai Hu Long Gu Mu Li Pian tablets are made with 100% natural herbs that are tested for authenticity, quality, and potency. A traditional water decoction is prepared with the herbs to reproduce the time-tested efficacy of the formula, and this water decoction is concentrated with our proprietary technology to form a potent extract that is made into easily absorbed tablets, which are remarkably effective, easy to use, and safe. The tablets are produced by Guang Ci Tang® in our state of the art cGMP-certified facility and imported in accordance with U.S. FDA guidelines. When you choose Guang Ci Tang® products, you are taking advantage of a wonderful fusion of science and tradition that incorporates the highest standards in the field of Chinese medicine today.

The standard dosage for NeuroSoothe™ is 5 tablets or pills each time, taken 2 to 3 times daily with or before meals. One bottle lasts users 2 to 3 weeks.

Chai Hu Long Gu Mu Li Pian (Wan) has been safely used with few adverse effects when it is used as directed.


1. Not for use during pregnancy.

Consult your herbalist or physician before use if you are taking other medications or receiving other medical treatments.
Discontinue use if allergic reaction occurs.
Keep out of reach of children.
In the media